Phase III was the first bar we played, and it was where we really started to get our act together.  We played there a total of nine times - as opening act, headliner, and by ourselves.  For roughly a year, from mid-1978 to mid-1979, it was a happening place, and we were fortunate to be part of it. 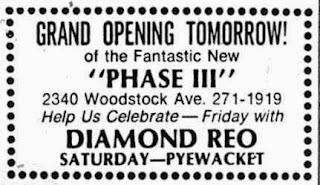 The Phase (as we fondly referred to it) was, to the best of my knowledge, just a neighborhood bar on Woodstock Avenue in Swissvale when Diamond Reo bassist Norm Nardini started booking bands there.  The Diamonds played there a lot while they were getting their "Ruff Cuts" album together, and Norm had the foresight to start booking cutting edge regional and national acts in addition to local bands like Pyewacket, Resistance, and Schizmo.  The first really noteworthy show was probably Diamond Reo opening for the Dead Boys on September 29, 1978.  Soon afterwards the Screamers (from L.A.) and Richard Hell (from NYC) each played two nights.  The first Richard Hell show (October 13) was the first time I went there, and it was a great show.  As it turns out, the Otters would play there for the first time just 11 days later.

According to Jim Spitznagel, Norm booked the Otters based on knowing Jim from the record store and hearing good things about our Chatham gigs.  He hired us to open for the Human Switchboard (from Cleveland) on October 24, and I had always thought that we also had help from Mark Pfeiffer (R.I.P.), the younger brother of the Switchboards leader Bob.  I don't remember too much about our set other than we probably played for an hour or less, opening with "Little Girl" by the Syndicate of Sound, a new song in our repertoire that would serve us well for years.  We also added a mercifully short drum solo to "Gloria".  "Hang On Sloopy" was played as an encore, the first time we got called to do one.  The sound system for this show was provided by Resistance, the first time we met them.  Evidently we did well enough because Norm hired us to return on November 3 to open for Diamond Reo at the release party for their new album.

Jim Bird and I had become fans of Diamond Reo, so we were pretty thrilled to open for them.  Once again we had the benefit of a great p.a. system, and we had the beginnings of a solid fan base that would come to every gig.  For this show we added "So You Want To Be A Rock 'n' Roll Star" as our opening number for the first set, and we repeated it as an encore after the second set.

The following Friday we were back again, this time playing the whole night by ourselves, most likely four sets.  We still had to repeat songs to fill up the time, and we even pulled out "Surfin' Bird" for this show.

In December we played at the Phase three times in five days.  On the 5th we opened for X, who were road-weary and somewhat miffed at having to use our paltry p.a. (they actually worried about whether the Screamers had a better p.a. when they played there in October).  I didn't stay to see them because I had a final exam the next day - in retrospect my time would have probably been better spent seeing X!

Our first gig as a headliner came on the 8th when we agreed to let the Puke open for us.  They were sort of a punk band caricature, playing minimalist songs with titles like "When I Get Bored I Play One Chord" and "You Piss Me Off".  Drummer Bill Bored played just a bass drum while Pat D. Hearse and Barney Scum (R.I.P.) played dissonant guitars.  They were already well known at Phase III, from throwing pennies at Diamond Reo to dancing with the Christmas tree at the X show.  As a result, they were already in the club's doghouse, and when they ripped up a Bible during their set this night, they crossed the line and were banned from Phase III forever.  That act cleared the room, although most of the people came back later to see us play, and it's become somewhat legendary.  Eventually we took the stage and played four short sets to a reasonably full room.

The next night we were there by ourselves, almost literally.  The Puke were off the bill, of course, but because of heavy snow and bad roads there was hardly any audience, either.

We didn't play at Phase III again until the following March.  In the meantime, I went there regularly, seeing Destroy All Monsters with Ryjel on the 16th, Stiv Bators (from the Dead Boys) and Diamond Reo on New Year's Eve, and Resistance in February.   Destroy All Monsters, which included ex-MC5 bassist Michael Davis (R.I.P.) and ex-Stooges guitarist Ron Asheton (R.I.P. - there are getting to be lot of those!), was due for a return engagement on March 10, and we were booked to open for them.  What a great week of music that would have been - we opened for the Ramones at The Decade on the 6th and 7th, and some of went to see John Cale at Phase III on the 8th.  Alas, it wasn't to be - Destroy All Monsters cancelled and were replaced by the local band Young Lust.  We decided to play first, assuming our fans wouldn't want to sit through their set, and it was a good strategy.  While I remember nothing at all about our set, I sure remember Young Lust's, because they played until 2:30 in the morning for two people.  Eddie was stuck because they were using our p.a., and I volunteered to stay with him.  We were getting pretty disgusted, and finally the Phase staff made them stop playing.  Because there were so few people that night and we were playing for the door, no one made much money.  Young Lust harp player Lucy Van Sickle was so angry that she put a fist through the wall of the ladies' room.

On April 7th we played the whole night by ourselves, and since I don't have a tape of that show I have no memories of anything special about it.  By this time we were getting pretty established at The Decade and the Phase III gigs were more like filler.  By this time, Norm Nardini had moved on and booking was handled by John Kram, who worked with both Resistance and Young Lust in a promotional role.

Our last appearance at Phase III came on April 27 when we opened for Resistance.  Once again, I don't remember much about the show except that we got to use their stage lighting.  The problem was that they didn't put the colored gels in, so we were bathed in glaring white light for our entire set.  Once again, I think most of our fans left after our set.

Shortly afterwards the booking changed again - now it was Reid Paley, who focused on bringing in more cutting edge local bands like the Cardboards, the Shakes, the Shut-ins, the Cuts, and Hans Brinker & the Dykes.  Since we were not in the least bit popular with the crowd those bands attracted, we weren't hired.  On June 13 a benefit concert was organized for the two local new music fanzines, "New Magazine" and "P.T.A".  All of the bands mentioned about were scheduled to play, along with the Reallys (Hank Lawhead's band), Resistance, and Eddie & the Otters.  We agreed to play because we were friends with Mark Pfeiffer and Wayne Honath of "P.T.A.", but when an opportunity came for us to play The Decade that night, we opted out.

The Phase continued to have a lot of memorable shows, including Pere Ubu, the Lurkers, and Destroy All Monsters again.  However, later in the summer the owner decided to switch from live bands to live strippers, in part due to complaints about noise from the neighborhood.  Shortly afterwards the club was torched and stood empty for several years before being torn down. 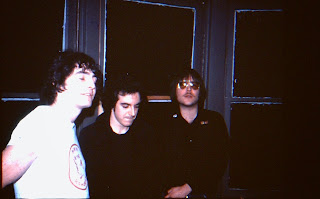 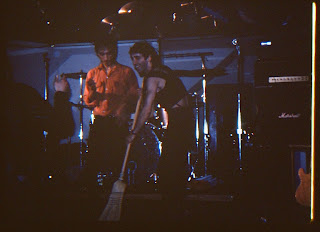 Frank Zuri and Norm Nardini of Diamond Reo at Phase III, New Year's Eve 1978
﻿
(Larry Rippel has a bunch of great B&W photos from Phase III on his MySpace page - worth searching for)
Posted by Mike Kolesar at 7:54 PM